On Saturday, June 3rd, I attended the Mud Hero Run/Obstacle course at Commando Paintball in the South-East end of Ottawa. I’ve never been to the event before, nor have I been to Commando Paintball, so both were new to me. I spent roughly seven hours on site, checking out the various events and vendors that they had to offer, and was pleasantly surprised at how well it was organized and how attentive the staff were in all aspects of the event. 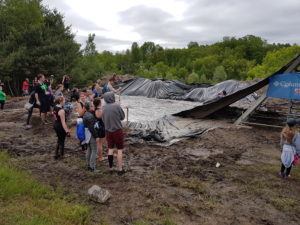 I won’t get into too many details of the actual course, as I didn’t run it myself (although I’ll definitely drag my butt out to give it a go next year). What I will comment on is how much I enjoyed the experience OFF the track, even as a spectator. The layout was simple: from the parking lot, there was a simple road that ran through the course, and as you made your way up the road, you encountered a first aid area, the beer gardens, a BBQ and DJ booth, and the final two obstacles of the adult course. 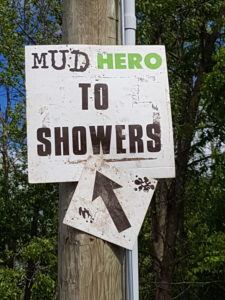 Beyond the beer garden, you’d find registration for the kids and their respective course. After making your way down a small hill, you’d find the remainder of the festivities and a few essentials: the bathrooms, the adult registration tent, the merch tent, showers, and various event sponsors.

The course itself was roughly 6kms over a muddy terrain, with obstacles to overcome throughout the run. I’ve been told that it was difficult to keep up a good pace through the forest areas due to the high mud levels creating a slick and messy trek. One person I spoke with, who appeared to be reasonably athletic, claimed that he previously “ran” the course in 58 minutes, and estimated the same time for this year. 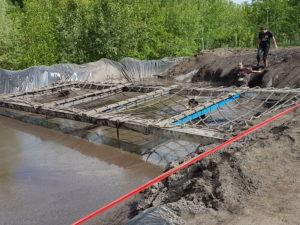 In addition to the adult course, the kids had a course that ran every 15 minutes which was absolutely hilarious! They started off looking so crisp and clean, but over the course of three laps, got progressively more covered in mud! Some kids hit the last obstacle and just dove into a huge mud puddle, much to the chagrin of their parents watching from the sidelines. The kids that I saw loved it, and it ran smoothly for most of the day, with only a few tears from hungry or tired children. The adult track was equally messy, with many individuals and teams showing up with bright clean uniforms but returning doused in mud. It was highly entertaining, and people loved it! The shower facilities were abundant, but it was apparent that many people decided not to use them; whether that be due to a lineup or simply them embracing the authenticity of the event remains unknown. Either way, they went home a mess. I can only imagine the car interior detailing work that would be needed after that. 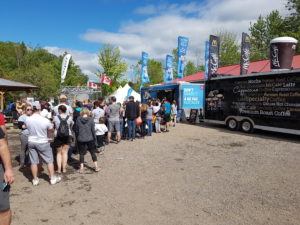 One of the sponsors of the event was McDonalds, with a setup of both a McCafé and a McFlurry trailer. Both trailers had huge lineups all day. When I arrived at 10:00am, coffee was a necessity, being pretty chilly outside, and remained that way until mid-afternoon. Participants finishing the races were shivering pretty badly, and with no indoor space to warm up, I’m sure the coffee was a welcome treat. As the day warmed up, the lines shifted over to the McFlurry truck, where it remained busy right up until closing at 6:00pm (see picture).

Initially, when I saw the participants come in, smiling and excited, to do the race, and then finish in such high spirits, I was inspired to sign up immediately for next year. As the day progressed, however, more and more people seemed to be limping around due to injuries, albeit minor. One man in particular, who was sporting a “Spartan Run” t-shirt was unable to walk but was still able to make his way to the beer garden. That makes me a bit uneasy, but I still think that I’m all in for next year! 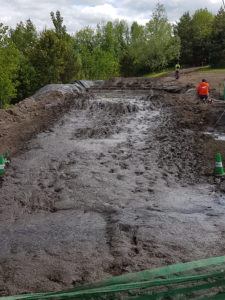 Speaking of the beer garden: it was huge, with lots of tables and open space. Each participant was given a token for a free Beau’s beer or a soft drink so most people took advantage of that, which made for some longer lines. The BBQ was delicious, with some of the better hamburgers and hotdogs that I’ve had at an event like this. The DJ playing in the beer garden/BBQ area was from Quality Entertainment, one of the area’s leading event entertainment companies. He played a great mix of music that everyone seemed to love, with people often filling a make-shift dance floor. The staff onsite from Commando Paintball, supported by the many volunteers, created an amazingly well-run event with the finest details considered. It’s clear that they’ve done this for several years and have a well-oiled machine working to make it a great experience for all ages.

From what I experienced, there were only a few things that seemed to draw some negative comments. First, the bathrooms were all located at the bottom of that little hill, with none in the beer garden and none on the way out to the parking lot. So, assuming a similar layout next year, make sure that you use the bathrooms when you can before your long drive back to the city. Second, there were a lot of questions being asked as to where people could find things. The signage was pretty much non-existent, making it difficult for people to find what they were looking for, especially amidst thousands of people going in every direction. Although these were an annoyance to some, as far as I’m concerned, they were very small issues when you look at the grand scheme of this incredible event.

Overall, I was very impressed with this event, so much so that I will definitely sign up for it next year. It was hands-down one of the smoothest run events that I’ve attended, and I would recommend it to anyone who loves a good time and doesn’t mind getting a little messy!