This past weekend, there were three beer festivals hosted in the Ottawa area. I decided to spend some time on Sunday at the smallest one, which was located at Hintonburg Park. This festival was hosted by the Brewery Market and was a really great little event!! 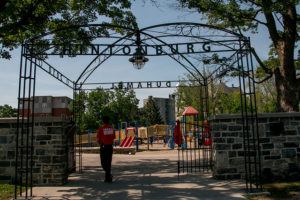 Hintonburg Park, nestled right in the centre of Hintonburg, is a local hidden treasure that most people who are not residents in the area do not even know about. It offers a splash pad, multiple play structures in a sandy area for kids to enjoy, some shady picnic areas, and a large open field to throw a ball around, play Frisbee or do any number of other outdoor park-like activities. The entire area is enclosed by a stone wall with metal decorative bars throughout, giving it a rustic look with a hint of European charm. 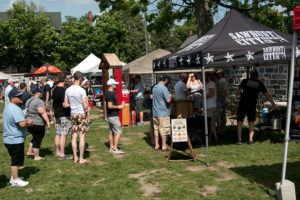 The setting was perfect for a beer festival, and not surprisingly, was very well attended. The Brewery Market has put on several festivals and continues to build on their successes. This was very evident, as many patrons were re-using souvenir cups from previous events. This free festival required patrons to purchase a cup for $5 prior to purchasing their different brews. I am such a huge fan of this concept, as I’ve been to many festivals, and am always disgusted by the amount of garbage that accumulates, with no sign of concern from some festival organizers. 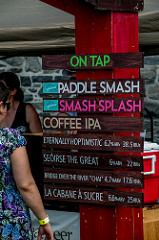 Not all festivals are like this, and while more and more are starting to use bio-degradable cups, they don’t provide recycling bins or any special disposal method. {Quick shout out to Bluesfest and Cityfolk who have entire teams of environmentally-conscious volunteers who collect up all their bio-degradable cups to minimize garbage}. The Brewery Market took that concept one step further, with most patrons leaving with a great souvenir to be used at their next event. 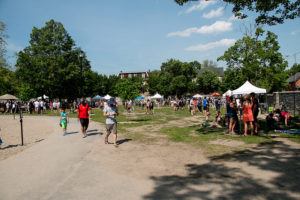 Enough about the cups though, people came for the beer. With approximately ten breweries in attendance, averaging 2-4 types of beer each, there were plenty of choices for every connoisseur. One of my favourite summer beer comes from Beyond the Pale (www.boyondthepale.ca). Their red-grapefruit based wheat beer, Pink Fuzz, is absolutely perfect for a hot summer day (but drink with caution, because at 6% alcohol, it can catch up to you faster than you’d expect, especially when drinking quickly in the sun). I recommend this for a hot day on a patio, or even better, at an outdoor beer festival! 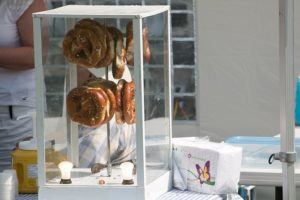 To go along with the multitude of beverage choices, there were some unusual (in a good way!) food vendors. Although I enjoy the food truck offerings at most festivals, it was refreshing to have a change. There were two vendors on one side of the park; one offering Asian treats such as bite-sized eggrolls and beef tacos, the other with multiple choices, the highlight of which (in my opinion) was the Sweet Potato Burgers. I chose a beef taco for lunch, and was disappointed by the quality of beef; it was too chewy, and while I enjoyed the flavour party in my mouth, I wouldn’t get it again, simply due to the poor quality of beef. On the other side of the park, you could get fresh pretzels (a beer festival staple, probably to make you more thirsty), or some ice cream from Moo Shu Ice cream (www.mooshuicecream.com ). Ice cream flavours were the Dominion Beer flavour or the Froot Loops flavour. Amazing right? The Froot Loops ran out by around 4:00pm, and was replaced by a peanut butter flavoured ice cream. Obviously a hit, it was such a great idea. 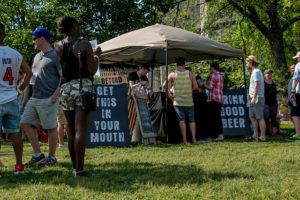 Sunday was very hot and while it was difficult to spend the whole day outside, I managed to fight through the heat and take in everything that I could while in attendance. Each time I walked by the splash pad I wanted to sit in it just to cool down for a few minutes and then just deal with the wet shorts. The majority of the patrons sought shelter underneath the large trees near the front entrance, emerging only when they needed to re-fill their cup. According to my phone, we hit 38 degrees in the sun and wow, did it ever feel that way. 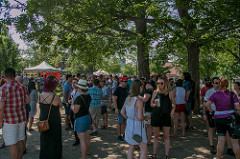 I would estimate that close to 2-3000 people came through the park over the course of the day, not all attending the festival though. The park itself and the splash pad were also very popular, and likely would have drawn quite a crowd even without the beer festival going on. The promotion and advertising for this festival seemed as though it got a little lost in the weeds with two other larger beer festivals going on at the same time last weekend, while also leading up to the big one on the June 17th weekend at Aberdeen Pavilion. (https://www.ottawabeerfest.com)

However, due to the multi-purpose location, patrons were still there in big numbers, enjoying a necessary beer or two while managing their kids, who were having a blast getting wet and dirty playing in the park. 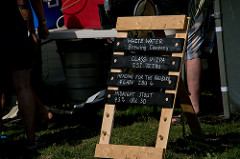 If you’re a fan of Craft Beer, I highly suggest attending the Brewery Market events. They offer a great selection from local brewers without having to purchase admission tickets, while still having a great time with friends.