This past weekend, I was able to attend the Poutine Festival that was being held in Festival Plaza beside Ottawa City Hall. I spent most of the day hoping I’d be hungry enough to try a variety of the offerings from the multiple vendors set up on site. However, each serving was so huge, I had to stop at just one big one and a bag of mini-donuts. It was a very tough choice, but ultimately, I picked the Lazy Loon, as they had a poutine with guacamole on it, which just makes me happy on so many levels. 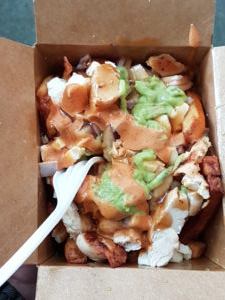 Despite the rain all weekend, both the vendors and the festival organizers were upbeat and eager to engage everyone in attendance. The layout of the grounds was simple, with a ring of poutine vendors encircling the central area (for those of you who are familiar with the area, it’s where the “Rink of Dreams” gets built in the winter months). I would estimate that there were twelve different food trucks set up for poutine and 4-5 offering other foods, including the famous lemonade lemon, a churro cart, and a mini-donut stand.

On the paved rink of dreams, a beer garden was set up, and included a small stage and a covered eating area. The beer garden was a 19+ environment, with only children accompanied by a parent permitted inside. Broadhead Brewery was the beer sponsor, and had six different offerings, plus a vodka/mix drink set up 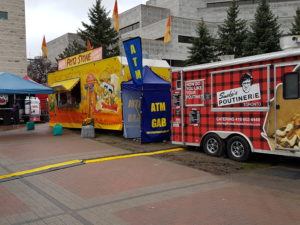 Starting at about 11:45 on Sunday, the School of Rock provided incredible entertainment. I was blown away by the musical aptitude of these children, as well as their familiarity with songs that no kids their age would typically know. A highlight of the concerts for me was when a small boy (probably 9-10 years old) engaged the crowd, saying, “So who here remembers the ‘Never Mind’ album from Nirvana?” That album was released about 25 years before this kid was even born. The baby on the front of that album is an adult now, haha. It was pretty entertaining, and demonstrated performance skills that are unusual for young kids. They were born performers.

At around 3:00pm, there was the annual Best Poutine contest, where each vendor submitted their signature poutine for evaluation to the judges. After an hour of lots of eating, and then voting, the results were tabulated. The top three, in order, were Fat Les’ Chip Stand, Smokin’ R&R’s, and in third place, Lou’s Fast Food. The line up at Fat Les’ was crazy after it was declared the winner. That line held for about an hour, so apparently, there were lots of hungry people waiting around until the first place winner was announced.

As a fun added feature of the day, there was an opportunity for the poutine vendors to show-off an ‘extreme poutine’ by creating something really unusual. Once again, Fat Les had a really creative entry, with their poutine being served inside a pineapple. However, their unusual recipe played runner up to a much more outrageous submission by Wickedly Sinful, who used crickets as a topping on their poutine. Neither of these were for sale during the festival; they were considered “possibilities” for next year’s event…so, lots to look forard to! *…crickets…*…. No?? Haha. 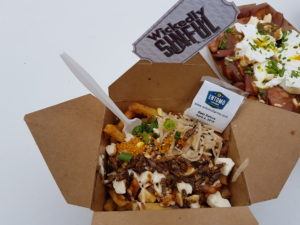 On Sunday, the event wrapped up at 6:00pm, but another hour or so passed as stragglers took advantage of the last remaining vendor selling to anyone still in attendance. Insert pic of bus here The festival was undoubtedly a success, despite the rain all weekend. At the end of the festival, the organizer, Les (not the same “Les” who won), seemed content with the outcome of another year, and was looking forward to his next event, coming up this month in Kanata. See you at Ribfest!