One of many exciting events held in Ottawa this weekend was the Ottawa Children’s Festival at Lebreton Flats. This annual event is designed for the enjoyment of children of all ages and their families. Each year, when I pass the event as it is being set up, I excitedly think, “OH…are those tents for Bluesfest?” And then I am always disappointed to learn that they are for the Children’s Festival. But this year, I went to check it out, and I’m now kicking myself for not going much sooner! 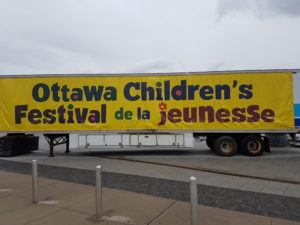 I went to the festival Saturday afternoon. I purchased the $13 tickets primarily to see Ashley MacIsaac who performed several hour-long performances over the course of the festival. I’ve seen him previously, but he is so talented, I was excited to go again. His concert began with a fantastic introduction by Catherine McKenna, sporting a Sens jersey, where she once again demonstrated her friendliness, and her unfailing commitment to the Ottawa community. 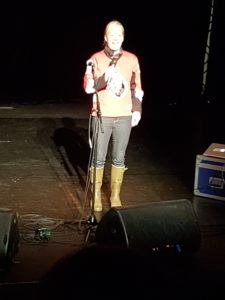 Ashley came on stage and performed for an hour, with only a few breaks to chat and joke around. He was accompanied by his cousin Wendy on the keyboard (and violin), and another member (whose name I didn’t catch), who provided the percussion for the concert both off the Sound Box (I’m not sure if that’s the proper name for them) and also adding beats and sound affects. It was a really entertaining and upbeat set, filling the dance floor at the front of the stage with kids (and Catherine)! It was a great concert and definitely worth the ticket price to attend. 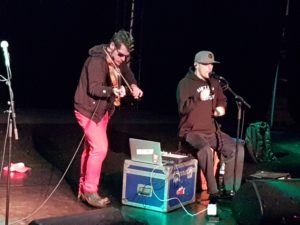 The concert was set up in the largest tent on site, also home to many of the larger performances scheduled for the festival; performances included highlights like Ashley MacIsaac and the African Land Circus. The tent was conveniently located at the far west side of the grounds, where it could be easily seen. 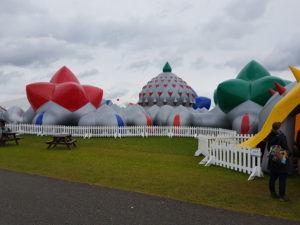 After the concert, I wandered around and took in some of the many other sights and entertainment for the kids. The layout of the grounds was centred on what appeared to be a giant indoor bouncy castle. This thing was MASSIVE, with several different rooms and hallways between each room. The lineup was considerable on the outside; I have no idea what capacity is for the inside. 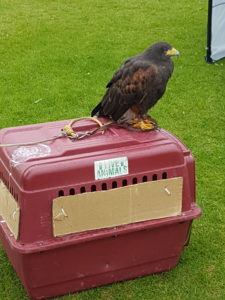 There were a number of vendors with simple activities for kids to do, and some simply selling products. These included Enbridge, Wilderness Tours, Costco, and even parc Omega with one of their birds of prey on demonstration. There was also an indoor rock climbing wall set up for the kids outside, which was very popular. One of the biggest draws was the face painting tent. Although it feels wrong to refer to their works of art as just ‘face-painting’. The area was run by a company from Quebec called Kromatic Extreme Makeup, and they’ve been part of the festival for 16 years. The system that they had in place was amazing; their work equally incredible. And don’t let the long lineup deter you as they take in about 20 kids at a time and run them through an assembly line-type process. It was so efficient and the results were truly works of art.

The grounds were also home to several food vendors, with a larger tent to eat in that also hosts smaller performances throughout the day. The food vendors served the basics: hot dogs and hamburgers, so if you’ve got kids who have allergies or dietary needs, I suggest that you bring some food with you. A few bottles of water and a coffee are a good idea to pack as well.

Parking was fairly simple. In an effort to be ‘thrifty,’ aka ‘cheap,’ I parked in a residential area about ten minutes away. There is three-hour parking available on the street there, and that was JUST enough. Other options would be the museum parking or along Wellington if you can find a spot there.

Overall, I was really impressed with this festival, and I’m trying to get this review posted as quickly as possible so it may have an influence this year, so if you can still make it today (Sunday), I would highly recommend that you go. (And most attractions are under tents, so don’t let the rain deter you!)