On Saturday, I had the opportunity to attend the Egg Drop put on by Kingdom Culture at the Aviation and Space Museum. This event had been advertised lightly for at least a month prior to the event but from the people whom I’ve spoken with, it’s details were not widely known. The basic idea that was being advertised was that 30,000 (later upped to 45,000) Easter eggs would be dropped by a helicopter and then kids would go collect them. Additionally, there would be face painting and bouncy castles available for the kids to play on. I signed up, as instructed, on the website and went with some family. In total, there were three adults and four kids in our group. The kids ranged in age from four to nine years old.

We arrived at 9:15am and were astounded to still find parking available at the museum and for only a $6 charge, we were happy to just walk into the registration line. The other parking option was courtesy of Cité Collegial who kindly offered up their parking lot and a shuttle service to run back and forth. The registration line up was almost half an hour, but that was expected. Registration was taken very seriously to ensure all attendees had the correct accreditation (wristband colour by age) as they were splitting up the kids for the egg drop so the little ones didn’t get trampled by the bigger kids. It was very smart to protect the kids.

One of the first things I noticed is that there was a huge number of volunteers at this event and every single one that we interacted with were first class, top notch people. I’ve worked in a lot of volunteer-run events and often you find people who don’t care too much about what they’re doing, but that was definitely not the case here. Each and every volunteer was helpful and looked like they were having fun. The only regret I have is that I wanted one of their hoodies. They were amazing hoodies, all black with white lettering #weheartottawa on the front and CREW on the back, topped off with the shape of the city of Ottawa on the hood. They were so nice and reason enough to volunteer haha. I asked a couple volunteers where I could buy one, but they weren’t for sale on site so, if any volunteers don’t want theirs anymore, I take a men’s XL. ?

Once into the grounds, there were three bouncy castles, one a basic jump-around room, and then a couple different obstacle courses to run through. They had massive lines on them as well so that was a little annoying, but understandable. We made our way along the fence line and discovered the dance floor and DJ area, the face painting and also a variety of simple games for the kids. It was well spaced out and despite the thousands of people there, never seemed too crowded. 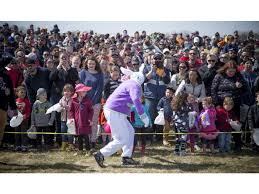 I was thinking before the event, how you could possibly organize thousands of small children and control something like this? Well, it was amazingly well organized with only a few minor glitches that I could see. There were three “heats” of children sorted by age, as identified by the coloured wrist bands, and they each had 30 minutes for their respective drop. At the end of the park, they had up yellow caution tape where everyone clustered and waited for their turn. A small helicopter took off from the museum runway and flew about 100 metres away from the barrier and dropped 15,000 eggs per heat. Once they dumped out all the eggs, the kids were released. For the first heat, the youngest child that was with us was stoked and ready to go. Only one adult was going with her, but we all waited right at the front. When that caution tape came down, I felt like the receiving end of that famous Braveheart scene with everyone rushing towards us to get to the 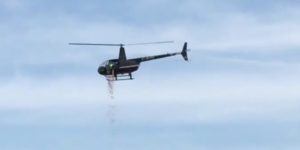 thousands of eggs before the next child. It was mass chaos but hilarious at the same time.

The eggs that were dropped consisted of plastic shells of eggs (the ones that you’ll see in any store really) with some chocolate inside, often those Lindor balls that we all love. Mmmmm. Additionally, selected eggs had tickets in them to be traded in for a gift later on. After all three of our heats were complete, we left with piles of chocolate and traded in tickets for about eight chocolate Easter bunnies and two pairs of sunglasses. These kids cleaned up pretty well.

My only complaint about the event (other than not being able to buy a hoodie) was the lack of food/drink available. The event organizers did send out information saying that food trucks had been cancelled so bring snacks, but it would have been nice to have the food there. We asked why there were no food trucks, and were told that the greedy museum wanted everyone to use their cafeteria. I find this disgusting that they would take away from this even for ONE DAY. This is a religious organization putting on a huge free event with tons of sponsors and the museum couldn’t even give up one day of sales that they wouldn’t have had anyway since all these people wouldn’t have been there. I’m so unimpressed with museum management right now. This was a terrible decision and looks bad on them.

Overall, this event was incredible! It was run as smoothly as can be expected as if it was organized and run by a team of experienced event planners (must have been). I would recommend it to anyone in future years. They even ordered perfect weather somehow! Everything was smooth and enjoyable to make a great day with the family, so if it happens again next year, don’t miss it!!