I’ve finally made it out to Winterlude this year and just in the nick of time to catch some activities on the last weekend of the festival. I went out and took in the sights of Dows Lake and then, later on in the night, Confederation Park. It was a great experience all around with perfect weather for wandering around and watching the activities. My idea was shared by many others as there were thousands of people out and about creating a difficult time getting around for parking and negotiating walking paths and sidewalks around the area. It was great to see so many people out enjoying our city’s festival though, and it truly was a perfect day….but almost too perfect. The weather hit +11C and sunny as an unusually warm streak came through making it gorgeous to be outside enjoying the perfect weather, but, the bad part was that skating on the canal was nearly impossible as you had to negotiate an increasing level of soupy mess of water and slush causing many people to give up on skating and walk along the mucky surface carrying their skates. 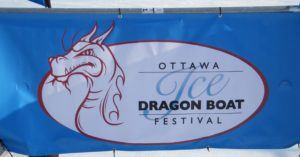 I started the afternoon at Dows Lake to see the frozen dragon boat racing that has been advertised for quite some time. It was the first time this event has been held here and it was quite a brilliant activity. The races were held throughout the day with the two finals running between 3:00 and 4:30. For those of you who aren’t aware,
there is an annual dragon boat race held in June at Mooney’s Bay here in Ottawa that draws thousands of people, with always an exciting concert line up as part of the festivities that take place around the actual races. 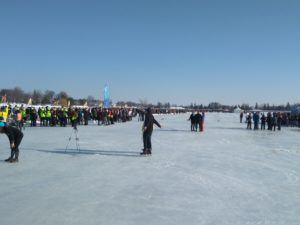 This winter version of the summer tradition isn’t as huge but still drew great crowds of people to cheer on their favourite team. The course was 250m in length with five lanes per heat. The dragon boats themselves were typical long canoes with the addition of the dragon head and tail and then a set of blades added to the bottom to allow for the boats to glide on the ice like a giant skate while the riders inside the boat use their “paddles” to push the boat along to the beat of the drum. 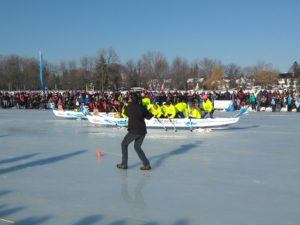 The final race for the co-ed teams was interesting to say the least. The ice had become slush and skate blades were just sinking in to the slushy mess so the boats did no better. Two teams took off pretty quickly and with only a few glitches and getting stuck once or twice were able to finish in decent time, even almost creating a photo finish with a huge come-back from Valecraft Velocity to win the championship by a nose. 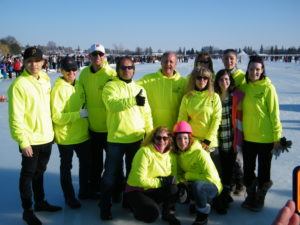 The battle for third and fourth place however was painful. The boats were moving at about 6 inches per stroke and so much effort was required to move the boats along, my shoulders hurt just watching the effort by the rowers. The time to cover the 250 metres was close to ten minutes. 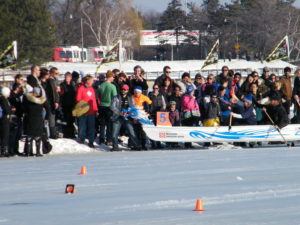 One of the teams also had a difficult time steering and went into the crowd a couple of times. This required someone to get out and re-position the boat, something not possible (or required) in the summer version of the races. It just adds to the challenge of the ice race. I wasn’t present for the entire event, but I can imagine that the initial races moved along much faster before the ice melted away. The canal was later closed at the end of the day and as far as I know has remained closed to the public, judging by the weather forecast, probably for the year.

After a quick stop at the Heart and Crown on Preston for some late lunch/early supper, I made my way to Confederation Park to attend the David Usher concert. I’ve enjoyed listening to Moist throughout my life but for some reason I don’t think I’ve ever seen him live. So even though there were six concerts throughout Ottawa last night, I chose to go see him. I do not regret that decision! David put on a fantastic show despite a “standard” stage set up. The Winterlude stage at Confederation Park is a basic stage with the normal lighting and sound and no extras, perfect for the wide variety of acts throughout the concert series. 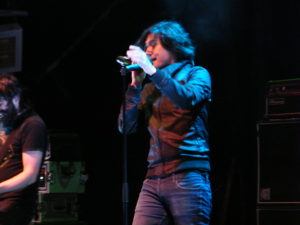 That made for a perfect intimate experience to see David at his best. He is an old-fashioned concert performer who doesn’t need extra theatrics on stage to perform a very entertaining show. This was truly a sign of experience and professionalism as he captivated the audience all the way through. With the concert, less than 90 minutes, he was able to perform all his personal hits as well as his hits with Moist. The crowd loved it the whole way through while enjoying hits such as Resurrection, Silver, Black Black Heart and finally the encore Push. 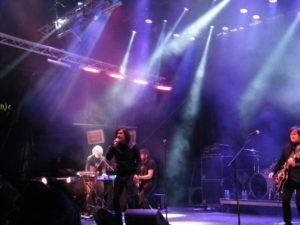 David released a new album called “Let It Play” in November featuring some of his best songs, and also includes some French Canadian inspired music. He played a song originally written in French by Alex Nevsky but David translated into English (with permission). I loved this song to the point where I am going to go purchase the record. It’s called “They Will Believe.” The crowd loved it as well…it’s a good choice for his concert while promoting his new album. After David was done, DJ Dan Desnoyer played for the crowd. I was actually not aware of this and had left right after “Push” in order to beat the crowd out. I regret this decision now as I grew up loving DJ Dan Desnoyer playing his Saturday night mixes 104.1 CKTF Radio NRG and owned some of his CD compilations. I didn’t know he was still mixing!

From what I’ve seen, Winterlude has been a huge success. That’s coming from the feedback I’ve received talking to people, my continuous searching through social media and now my personal experiences. If this is a sign of what’s to come for #2017Ottawa, then it’s going to be an amazing year in Ottawa for events. Stay tuned for updates, announcements and reviews!