I was honoured to attend The Tea Party concert Monday night at the Algonquin Commons Theatre. I want to preface this review by stating that I am a Tea Party fan and have enjoyed their music for twenty years. “Temptation” was one of my favorite songs growing up and I still love it today.

Now, with that being said, I’ll put it all out there and say that this concert was sad and boring. I realize I’m not going to make a lot of friends with that, and since starting Covert Ottawa Guy, this is my first negative review, but there’s no denying truth. 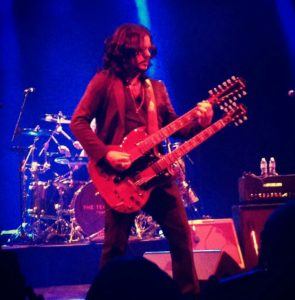 The concert started off really slow and mellow….and it continued that way all the way through with only a few exceptions. If memory serves, I counted six times when lead singer, Jeff Martin, demanded that the two levels of seated patrons stand up and have fun/enjoy the concert. Each time, the obedient crowd did so and then quickly sat down again at their first opportunity. About an hour and fifteen minutes through concert, they finally played “Temptation”, arguably their most popular song, and the crowd loved it (once they realized what song was being played). After the two-minute song was over, Martin called out “Do you want more???” to try and get the crowd more into it. Then they re-played “Temptation” again with a slightly different spin to it. It was really sad that this was what was used to get the crowd going. Then immediately afterwards, once the crowd was finally pumped up and ready for some faster music, intermission was called for 25 minutes with a promise to pick it up for the next set. That never happened. After the intermission, they played for another 45 minutes or so right until almost 11:30 but never really picked it up. 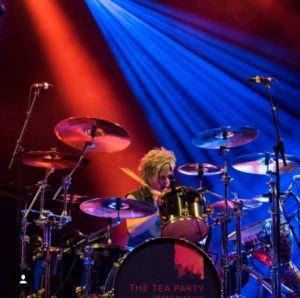 It wasn’t all bad. The crowd was responsive to “Aftermath” as a tribute to the late David Bowie, and when prompted, stood up to watch the show. In addition to the generally bored looking crowd, there of course were exceptions with the typical super-fans who parked front and centre from the second the doors opened. They took part in some headbanging and yelled and cheered for anything and everything. But overall the crowd was very sedated with only light head bopping going on. Through “Release”, there was crowd participation to help sing along and that went over well once again prompted to stand up, but then later, only 12 people in the seating area were standing during “Heaven’s Coming Down” as one of their best songs was played without the anticipated excitement.

Overlooking the yawns and the people leaning/resting on the crowd barriers and walls, I have to once again mention that the venue of the Algonquin Commons Theatre is amazing. I’m continually impressed with the quality of sound and light that they have and also the great bands that come to this intimate venue. A special shout out to the event organizers for attracting high quality performances. Check out their website at http://www.algonquinsa.com/ to see a full events list. Or stay tuned to my posts to see what’s coming up on a weekly basis.

Overall, I’m happy I went to the concert, but was disappointed with the quality of music that came from the Tea Party. I still consider myself a fan though, and they will always be a part of my musical history and “Temptation” still falls in my top 20 all time favorite songs.