Three words come to mind for the Ubiquitous Synergy Seeker (USS) concert Wednesday night: Energetic, Fun, Intimate. Ashley and Jason, the two lead members of USS, aided by Matt on percussion put on a high-energy show in the Algonquin Commons Theatre (@ACT_Ottawa on twitter). I hadn’t seen them live before so I didn’t know what to expect, but I was not disappointed and after enjoying all my favourite songs, I left feeling fulfilled.

For those of you who haven’t attended an event at the Algonquin Commons Theatre, I have to say that you’re missing out on a hidden gem of a venue. Although I’m not certain of exact capacity, the whole theatre holds about 750 people, with roughly 450 of them in two levels of seating and the remaining 300 in general admission on the floor. The acoustics are incredible and the proximity to the band is engaging. I’m always surprised at how intimate the experience is from general admission as there always seems to be space up front. Follow my blog and watch for upcoming shows to find out when to take advantage of this experience. Additionally, check out www.algonquinsa.com to see the upcoming events. I will also continue to promote their events on this site including, for you country fans, Brett Kissel (@BrettKissel on twitter) next week on January 23rd. The Students Association has surprisingly good bands year-round at the Commons Theatre. Get your tickets early though, and remember to read the requirements of the tickets as some events are students and/or alumni only. 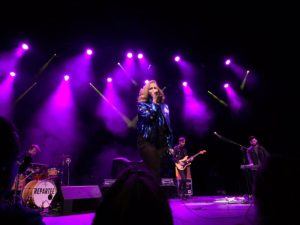 The opening act for USS was a band called Repartee (@Reparteemusic on twitter). They’re a fun group based out of St. John’s, Newfoundland so you know “you’ll have a time”! They play their own music with no covers and have just the right amount of energy to get the crowd prepared for USS but not overly exhausted so they’re tired by the end (can you tell I’m old??). Repartee is touring with USS so if you get a chance to see them on other tour stops, I recommend going early to take in both shows.

USS is a small band based out of the Toronto area and are typically classed as “alternative rock” played mainly by www.live885.com (@LiVE885fm on twitter) in Ottawa. Although the definition of “alt rock” is up for debate, they have a great combination of rock, dance and electronic music that creates an enjoyable atmosphere. USS opened with a typical concert intro and came out on stage with extremely high energy that instantly got the crowd pumped up! Jason performed some acrobatics with a run and flip across the front of the stage and then impressed the crowd by performing his music while maintaining a headstand on stage. His flashy Adidas flame-print ensemble was eye catching and added t 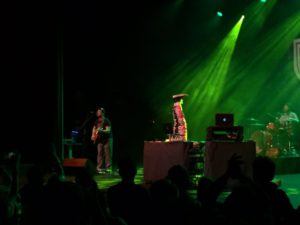 o his theatrics. Both Jason and Ash work very well together, and have obviously developed a seasoned bond between the two of them, allowing seamless transition between songs (including Ash using Jason as a human microphone stand for an entire song). Something in concerts that always impressed me is when artists take the time to acknowledge, and interact with the crowd. This was not lost with USS as Jason had quick chats and interaction with multiple people including two particularly excited fans who even brought what appeared to be a hand made cooling fan to blow in the star’s face (along with other toys for the concert enjoyment). 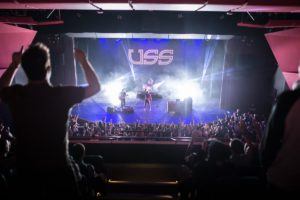 After the first couple songs were completed, I noticed that the energy level was dipping both on and off stage. However, this was quickly restored with the intro to “This is the Best” where the crown was right back into it loving life while singing along to every word. Six songs later once Hollowpoint was played, the theatrics began again on stage. With a welcomed addition of Dub-Step, specifically Skrillex, the atmosphere could have been confused with a much larger venue as the noise level and excitement was intense. USS, although not considered a “mega-band”, seem to have a very loyal and upbeat fan-base which adds to the fun of the event. 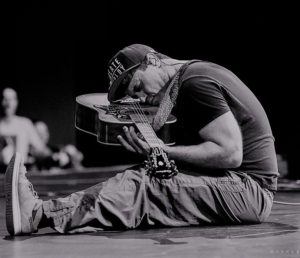 After a brief pause following the song “Damini”, they finished the concert with three songs with their massive hit “Yin Yang” as the closer. Once again, the crowd erupted for the final song, and once over, they left the theatre feeling totally satisfied to the point where encores were not even needed as they had heard everything they had come for. The concert was a huge success including the sales of merch where the “superfans” seemed to have cleared out the hats and t-shirts both coming into the concert and then again when leaving. 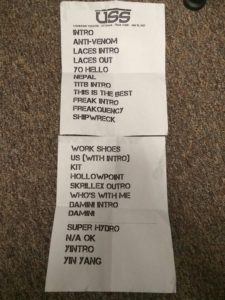 One interesting point to throw into the rumor mill; at the end of the concert, USS announced that they’d be back to Ottawa in the summer, BUT….this isn’t yet listed on their website http://ussmusic.com/tour/ . Bluesfest www.ottawabluesfest.ca (@ottawabluesfest on Twitter) maybe??

Next stops on the tour are fairly local if you want a road trip to see them perform.

Given the high energy that is required for their show plus the demands of travelling, this must be an exhausting tour with almost daily shows. If you can, I really do recommend seeing them live. The crowd energy and the entertainment value is incredible and most definitely worth the price of a ticket!