I’m going to preface this review by disclaiming that I know almost nothing at all about figure skating. I enjoy watching it, and can appreciate the athleticism of the sport, but I certainly wouldn’t be the guy giving a running commentary on the particulars and the technical elements of a routine. However, with Ottawa hosting the National Championships to kick off the 150th birthday year celebration, I knew that I wanted to be a part of this event, even if I AM just the clueless guy in the front row. 😉 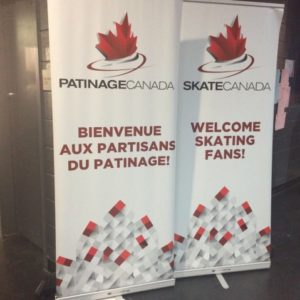 The championships are taking place all of this week at The Arena at TD Place. The event features approximately 250 skaters from across the country. Categories include Men’s, Women’s, Pairs, and Ice Dance. Each category has three levels: novice, junior, and senior. Skaters are vying for coveted spots on the Skate Canada National Team, as well as the teams that will compete at the World Figure Skating Championships this year. There is a lot at stake for these athletes.

Interesting fact: Ottawa hosted the very first National Skating Championships in 1914, and this year marks the 15th time that our city has hosted. It is one of the biggest events in Canadian skating competition, and the largest gathering of Canadian skating talent. And take it from a spectator: the talent in this country is unbelievable. 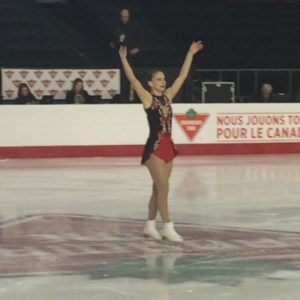 Tonight I attended the Junior Women’s Free Program. I should mention the ambiance in the venue. I walked in and was immediately overwhelmed (in the best possible way!) with the sounds and smells of any major sporting event. Popcorn, poutine, you name it, they had it. The crowds (hundreds of people) were excited, and there was an energy of eager anticipation. Many of the athletes from around Ontario had family and friends there to support them, so there were spectators holding signs and gifts, large and small, for the figure skaters. Just inside the venue, the inner wall of the TD Arena was lined with vendors, selling everything from skater trading cards to fancy blades to skate boots. There was some great stuff there, and even I may have gotten slightly caught up in the excitement of the competition, as I nearly bought myself some figure skates. 🙂 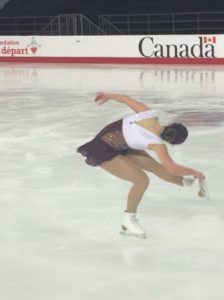 The seating provided an intimate setting for the event. Trust me when I say that there is not a bad seat in the house. There are massive screens above the ice as well, one on each side and one front and centre. These screens allowed viewers to see the performances up close, and they also allowed for slow motion playback of highlights from each routine while scores were being tallied. They also displayed detailed score breakdowns for each competitor, which was really helpful for us who are new to the sport. The venue itself is clean, and there are staff members strategically and conveniently placed throughout the seating area to help whenever necessary. It is truly a family-friendly event, there were people of all ages in the seats. Announcements and introductions were made in both English and French, which I am sure that a number of people appreciated. 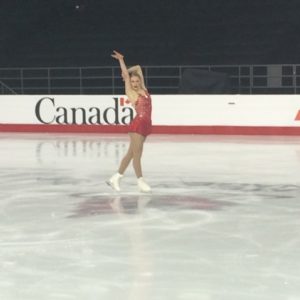 The event began with a video showing clips of Ottawa at night. Shots of the TD Arena with the lights and scenes of the city in the background danced across the screen. The champions from each category in last year’s competition were announced, with a short performance clip accompanying each. I couldn’t help but feel as if I was in the presence of true greatness. These young athletes really are the future of Figure Skating, and I felt as if I was a part of history in getting to see them compete live. A second video then began. Moving music was played while iconic shots of Ottawa in the winter, including parliament and a billowing Canadian flag, were displayed. It was absolutely breathtaking. I am not really an emotional guy, but it made me proud to be Canadian.

As I am certainly not a technical expert in this sport, or a technical amateur, even, I am going to relay some of the highlights of the evening’s competition with a set of awards of my own.

Victoria Bocknek (Central Ontario region, YRSA SC)- Victoria’s routine was effortless. She is a beautiful skater and a real joy to watch. She had a bad fall, where she actually ended up on her stomach on the ice. But she got back up so quickly and carried on that it was almost as if it never happened. She demonstrated so much strength and energy in her routine. Afterwards, while waiting for her scores, she appeared to be happy and joking with her coach. Amazing.

Sarah-Maude Blanchard (Quebec region, Sherbrooke)- Sarah-Maude began strong and kept up that energy throughout her routine. But there was something about her that seemed very glamorous. She looked like a professional, and her intense facials provided an emotional component to the routine that most of the others lacked. She scored very well.

This one is a tie, and goes to Sophie Larouche of the Quebec region and Evelyn Walsh of the Western Ontario region. (London). The choreography of both routines was incredible.

Aislinn Ganci, Alberta, Northwest Territories, and Nunavit Region (Sherwood Park SC)- Aislinn had the very best music. It was upbeat, lively and energetic, and her performance was equally so. Her expressions were intense, and the crowds loved her. Her score reflected her amazing performance. 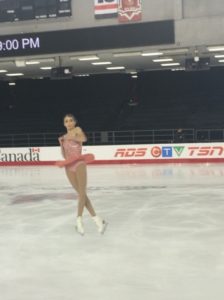 I am not what one would call a fashionista, but one costume just ‘popped.’ Among a sea of black skating dresses adorned with silver sparkles, Hannah Dawson of Eastern Ontario really stood out. She wore a dusty rose/salmon coloured skating dress. According to the group of teenaged girls seated behind me, providing an entertaining commentary of the costumes throughout the entire night, Hannah looked the best.

Lissa-Anne McGaghey of New Brunswick (Campleton SC) takes this one, hands down. Her song choice was contemporary and recognizable, combining the elegance of strings with what sounded like Queen. There was a calmness to her routine, as if she’s a seasoned professional, but you really could tell that she had an energetic spirit about her. She was one of the only athletes that I saw smile. The crowd loved her.

Best dancer and Most Composure and Coolest Trick: McKenna Colthorp, representing the BC/Yukon region (Kelowna SC), takes all of these awards. She was by far the best dancer of the group. Her movements were fluid and graceful. And despite having a number of falls, she performed a fantastic routine. She was smiling throughout, even though she appeared to injure one of her hands. And she did this trick; it was a sit-spin, I think, but in the middle of it, she did a little hop, which I haven’t ever seen before. It was different and really impressive. It’s hard to explain these types of things with my limited knowledge, but trust me, it was cool.

Jennyfer Richer-Labelle (Quebec region, St. Jerome)- This routine was fantastic in my opinion. The song was in French, which I thought was great. She was by far the most passionate performer of the night. Her score was not among the highest, but in terms of entertainment, her routine was the best. 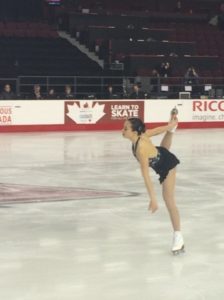 And that is my recap of the National Skating Championships! There is still a chance for you to go; it’s on all weekend right through to the 22nd. Tickets range in price, with adult tickets priced between $34.65 – $64.90. I would highly recommend that if you get the chance, you do go. It is such an incredible display of the talent that we have here in Canada, and in Ontario especially. It makes for a really enjoyable and entertaining day/evening out for the entire family, even those of us with a limited* knowledge of the sport.

*By limited, I mean non-existent 😉