I’m making an attempt at writing up an intelligent yet entertaining re-cap and summary of my thoughts and the results of the Golden Globe awards held Sunday night. I’ll start off by saying that I have never previously taken much of an interest in an awards show but I’m intrigued by the following that these events receive from the public, and given the nature of this blog, I wanted to get in my two cents and educate myself.

I’m going to start with the initial one hour of the red-carpet arrivals of all the celebrities. This hour is intended to show off designer dresses and tuxedos to make all the magazine covers for the next few weeks. In that respect, the Golden Globes have succeeded. I’m going to keep this section short as I’m by no means an expert in the fashion industry and wouldn’t want to ruffle feathers of those of you who actually know what you’re talking about.  However, I have to say that I’m disappointed in the level of outlandishness in the dresses, as it seems that many of the celebs chose to tone it down a little and play it safe; not everyone though. 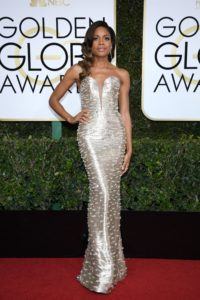 I’ll get straight into it and state that there were two fabulous looks that could go #1 and #2 on most people’s votes, but in an effort to choose one over the other, my top pick is Naomie Harris (left). She just had it all together and although not overly extravagant, her dress was elegant and still unique to support the individual style of the designer. Additionally, it worked well with her features and accessories. Basically, she wore it very well. I make note of her gorgeous diamond earrings (that are likely more expensive than my car) as they highlight the sparkle of her dress. 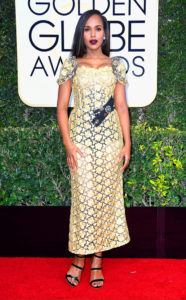 My second pick goes to Kerry Washington (right) who is basically tied with Naomie Harris in my mind. Kerry, in her Dolce and Gabbana, also looked stunning, created a difficult choice between the two of them. Many of the comments gave her #1 but I’m sticking to my guns on this one.

Finally, honorable mentions to Sophie Turner, Drew Barrymore and Emma Stone who round out my top five. 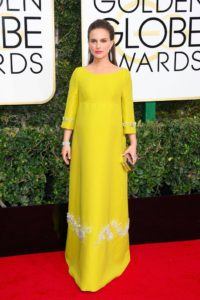 At the bottom of any list however, requiring special mention is Natalie Portman (left), who looked great, except for her choice of dress. I really like Natalie Portman, but the dress she chose was awful. I highlight a comment made by @ifyouseekjesse (Jesse Reynolds, Jump 106.9, Ottawa) “Natalie Portman’s dress looks like someone spilled a glass of wine on the one she was going to wear…” I couldn’t agree more. 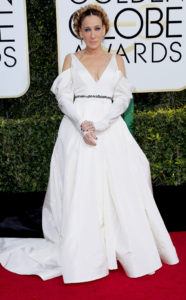 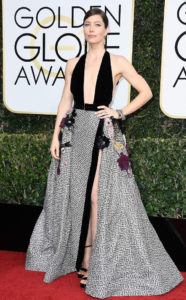 There’s also a lot to be said for Jessica Biel and Sarah Jessica Parker’s dresses (right) but as mentioned above, I really don’t want to get too much into the fashion spin as it’s not my expertise. Feel free to Google these and comment with your thoughts. 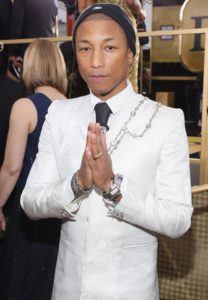 On the male side of the coin, Pharrell was once again the hands down winner of men’s fashion with his unique style sporting a white (with designs), long-jacket designer suit from Chanelle’s Bombay Paris collection. With his iconic hats (this case a tuque) and extra added bling on his clothing, there was no competition for him. 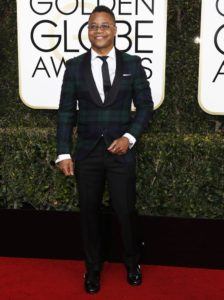 An honorable mention goes to Cuba Gooding Jr. for his plaid tux from Hackett of London that looked fantastic and stood out from the standard black/white look.

Before I get into the summary of who won what awards, I have a general observation that I noticed throughout the show, especially highlighted in the first hour during the red-carpet arrivals. Reiterating my initial disclaimer that I’m not a seasoned expert of award shows, I have to say that I’m surprised at the significant number of references to the Golden Globe’s being a drunk fest where everyone just parties and gets loaded. I thought it was funny the first, and even second time that it was suggested but as the “jokes” continued, I feel as though they must have merit. I’d estimate that half of the interviews conducted with the attendees included some form of question related to the quantity of alcohol and duration of drinking at the banquet. When John Lithgow was asked if he was going partying after the show, he politely avoided the question and said “depends if I win or not.” Hugh Grant was also specifically asked how much he plans on drinking. Later on, just before the awards started, Al Roker commented “That’s what makes a great show, everyone is drinking.” There is also a report (and pictures) of Chrissy Teigen falling on the stairs with suggestions that she was drunk already. 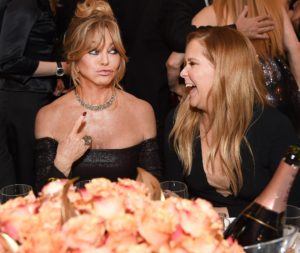 Finally, I’m not convinced that Goldie Hawn was “acting” when presenting the award for best actor in a motion picture (musical or comedy). She appeared to be quite intoxicated and needed her co-presenter, Amy Schumer to assist her in even finding the cameras. Is this awards night really about that? I’m not against drinking and having a good night, but I find it difficult to imagine that the main point of the evening is to get really drunk, and if it is, why make such a production out of it in front of the cameras and general public?

As anticipated, Jimmy Fallon was perfect. The opening performance and jokes were very well executed and hilarious. The song/dance in the street around the limos was well choreographed with a great combination of many of the stars from various shows/movies from the past year. Jimmy’s opening song was hilarious and also very well choreographed. The whole opening was well rehearsed, well timed and an appropriate length. I have to admit, my favourite one-liner in the introduction jokes was that “votes were tabulated by Ernst and Young and Putin.” He got just the right amount of Donald Trump jokes in as well. It was very well written and very entertaining setting the scene for an exciting night ahead. It was a great first impression for an awards show virgin such as myself.

I don’t watch a whole lot of TV but I hear of all the shows that my peers enjoy and it makes me curious about them. Two years ago, I was sick for about three weeks and couldn’t leave the house so I caught up on all kinds of shows I’d heard of through others and it opened my eyes to what was out there. There are so many shows that I simply couldn’t stop watching so I ended up binge-watching four different series from the beginning to the most recent episodes. That to say, I appreciate the entertainment value of these shows and I’m hoping that I can be inflicted with the same malady again this year so I can get caught up on these new series that I simply haven’t made time to watch yet.

Now that the awards are all handed out, a HUGE congratulation to La La Land for taking away seven awards!! I’ll have to make an effort to go see it so I can fully appreciate the apparent genius that went into the creation of that movie. To conclude this post, please find a full list of all the winners from the ceremony along with a link at the end detailing all the nominees for each of the categories. They are in order of presentation.

Best Performance by an Actor in a TV Series – Drama

Best Television Limited Series or Motion Picture Made for Television

Winner: The People vs. OJ Simpson

Best Performance by an Actor in a Supporting Role in a Series, Limited Series or Motion Picture Made for Television

Best Performance by an Actress in a Supporting Role in a Series, Limited Series or Motion Picture Made for Television

Best Performance by an Actress in a Television Series – Drama

Best Performance by an Actor in a Motion Picture – Drama

Best Performance by an Actress in a Motion Picture – Drama